Breaking Gender Boundaries in the Middle East: It take balls, brains, and bravery

The past month in the US has proven big in gender and LGBT issues – Bruce Jenner’s transgender interview changed the way America sees trans individuals, the supreme court makes a decision on proposition 8 regarding same sex marriage, and the nation faces the potential of its first woman president with Hillary’s bid to run.  And though there are still major strides to be made, America seems to be accepting change at an increasingly accelerated pace.

What do changes in social gender norms mean in nations outside of American boundaries?  Change is in the air in the post-Arab Spring Middle East as well.

As parts of the MENA region face increasing oppression under fierce dictators and the rule of terror groups like ISIS – there are young people in areas outside of terror control that are breaking the gender boundaries such Islamist groups seek to maintain.

During the 2011 Egyptian Revolution, women were pivotal in leading the cause to advance their   But even as laws change in a few short years, social fabric can often take a generation.  In Egypt, women have been taking this into their own hands.  Recently, Egypt awarded a mother, Sisa Abu Daooh, who dressed like a man for more than 40 years in order to provide for her family.  Illiterate and widowed, she was forced to find work to support her children - being a woman in Egypt can be dangerous, being a woman in the work force equally so, but she courageously worked to do so – albeit dressed like a man.
rights and place in Egyptian society.

However, there are women of a younger generation that are trying to break traditional work barriers without the gender-bending cloak and veil.  Mennatullah El-Husseiny sought to break taboos of women’s place in the public social fabric of Egypt by doing jobs considered to be “only for men.”

Women are not the only ones who are trying to crack the glass ceiling they face in the Middle East - in Turkey, young men are brining back an age-old art – the Ottoman tradition of male belly dancing.

Known in Turkish as zennes, rakkas, or koceks, the art died out during the Ataturk era and has only recently resurfaced, but in the current political atmosphere is considered part of a homosexual culture in Turkey – a sentiment that while still considered taboo in many parts of Turkey, is becoming more accepted in its modern and increasingly globalizing society.  And although the zenne scene in Turkey is becoming more accepted, one of the male dancers interviewed in an al-Monitor last December still declines to have his name and photo revealed - cracking the glass ceiling can still come with a price...
Posted by Unknown at 8:33 PM No comments:

Time to Change the Digital Dialogue on Religion and Violence

In preparation for writing this blog I scanned the Internet looking for images – and came across the horrific news of the Ethiopian Christians killed by ISIS in a newly released video.

Throughout history we have seen the repeated loss of innocent lives in the name of one religion or another – during the crusades, many Muslims lost their lives at the hands of Christians.  Yet at no point in time have these values of death in the name of god held to the true message of religion – peace, alms for the poor, and understanding of the plight of others.

As I struggled to digest the recent news from ISIS, I tried to determine what I wanted to emphasize most in this new blog – and although history seems to continue to repeat itself, one thing that is left out is the reality of the situations – religion does not justify the killing of others.

Our media perpetuates so much information about the Islamist terrorists whose campaigns are sweeping the Middle East and North Africa – but what is often left out of the media is the distinction between Islamism and Islam.  One of the first things that is important to understand about the Jihadi Salafist ideology that is sweeping the world today is that this is NOT true Islam.

Baghdad was once known as the ‘City of Peace’ (Madinat al-Salam) - but that was in another lifetime. And today, even with the trillions of images that exist online, one would be hard pressed to find any images representing Baghdad and peace.

In an effort to illustrate that Islam is at its core a religion of peace, I attempted to find images to display this for my blog – I was truly shocked at the dearth of imagery available to illustrate this point.  One of the few stories available in the “recent memory” of the Internet that truly illuminated Islam and the peaceful nature of the religion came out of a period of turmoil – the Arab Spring. During the 2011 Egyptian Revolution, while Egyptians rallied together, Muslims stood guard to protect the Coptic Christians from violence during prayer – and the Copts did the same.

Every time an image of a group like ISIS or Ansar Al Sharia is reproduced, or clicked on, it only feeds the propaganda machine these groups are trying to proliferate.  As they bastardize religion by using it as a justification for violence, they are at the same time killing the true peaceful nature of that religion in the minds of those outside of it – feeding the Islamaphobia beast – and furthering their cause against those for hating Islam.

Let’s stop giving them free propaganda.  Send the ArchaeoVenturers Project your images of how Islam represents peace.  Let’s change the dialogue together.

Posted by Unknown at 9:11 PM No comments:

Why we developed the ArchaeoVenturers Project

For years my family silently suffered behind their smiles and nods as I would go on – and on – and on about archaeology, anthropology, the Middle East, or whatever it was that I was working on or researching that week. The problem is – the details I found fascinating were not quite as fascinating to those around me – except for Justine, of course! We realized that there are so many important and amazing topics in history, science, and global affairs that would be interesting to so many – if only we could change, and shorten, our discussion of them. We developed the ArchaeoVenturers Project to break down all of the awesome stuff and put it into a more easily digestible format for those both in and outside of the field.

What you see as available on television for the characterizations of a scientist, archaeologist or engineer, always seems to fit people into these little boxes – and women even more so. One of the amazing things about my family and Justine’s – aside from their putting up with our constant drawn out discussions of science and history - is that they never told us that we couldn’t do something. Being women never once hindered the way we conducted ourselves as school, in the field – or in fashion. Only when I got older did I realize the obstacles women faced in one field or another. I love digging in the field, getting dirty, and working outside in 100-degree weather – I enjoy getting entrenched in academic research and examining new ways of looking at the world. Both of these are commonplace for someone in a social science or humanity – but what I later learned wasn’t so commonplace were some
of my extra circulars – namely, being a cheerleader in college – and for those who know the cheerleading lingo, I was a flyer. I had no idea these two roles in my life were considered mutually exclusive by many. I never liked the idea of women needing to fit into these little boxes – you often hear about a renaissance man – but less often a renaissance woman. 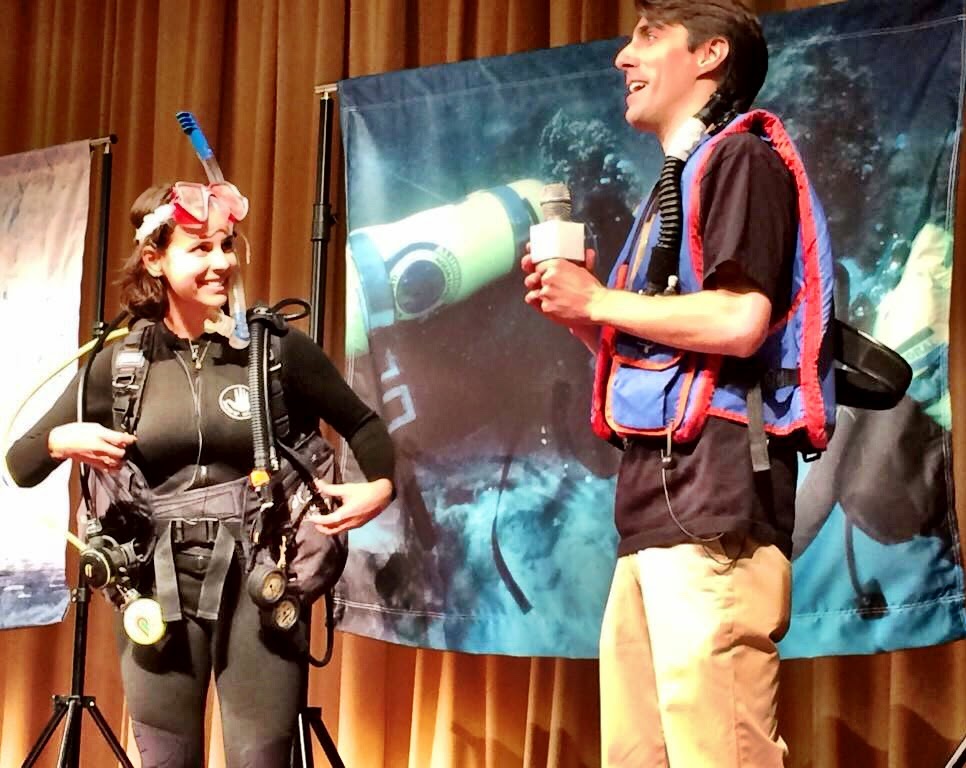 Katie and I have known each other since graduate school and something we started to talk about more over the years was how we engage a different audience for our archaeological pursuits. Her work at the Capitol Archaeological Institute at GWU fueled her need to find creative ways to make archaeological lectures more appealing and then when we started to work directly together, we tried throwing archaeologically-oriented events that would reach a broader audience. This in part was because of our friendship with the founder of Thirst DC who did exactly that- only more heavy on the science and with bigger audiences. We decided that in order to engage the current generation in their digital world, being active on social media would be only the tip of the iceberg. When a sample of today's generation was asked if they preferred to watch a YouTube video or read a blog, 9 out of 10 hands raised their hands for video, and yet the average length of time they watch videos averages on 30 seconds- so that's why we decided that videos were clearly the avenue to pursue but they needed to be short and concise - the blogs are for folks who are likely our age and older, people who are still interested in gathering supplemental information via the written word.

So, for me at least, and luckily Katie shared the same view- we just wanted to engage a more general
audience than just our colleagues, and it seemed like the logical thing to do would be to follow these growing online trends. I've learned that pursuing archaeology doesn't mean much to me if there is no one to interact with, whether that's a descendent community member, a student diver in Youth Diving With a Purpose, or someone who just found ArchaeoVenturers online randomly. We need to be sharing it with more people, or we are going to be outgunned by those who do make it more interesting. On it's own, even without the glamorous pull of lost treasure, archaeology can be fantastically exciting and I think that as a rule, we should be doing all that we can to captivate our audiences.

------
The #AVProject was developed for all of the renaissance women, men, girls and boys out there – the people that are breaking stereotypes on their way through the glass ceiling. #LetYourAVflagFly
Posted by Unknown at 10:26 AM No comments: